The next TOTAL solar eclipse in the US will occur on April 8, 2024 starting in Texas and crossing northeast to Maine.

Are you ready?
If not, it is time to start placing your order for your solar eclipse glasses. This is one of the most impressive astrological events, and it is just around the corner. Be sure to have your solar glasses in hand early to get the best prices, and avoid the rush of late buyers!
The last total solar eclipse that the United States witnessed was in August 2017, and it was one of the biggest astrological events in history. Despite the millions of people who witnessed this event, there were many who missed out. While 2024 might sound like it’s a long way off, many people are already starting to get prepared.
WHERE WILL THE ECLIPSE TAKE PLACE?
On April 8, 2024, the shadow of the moon will once again completely block out the sun across the United States, on a path that will run roughly from Texas to Maine. Cities in the totality include: Austin and Dallas, Texas; Little Rock, Arkansas; Indianapolis; Toledo, Cleveland and Akron, Ohio; Buffalo and Rochester, New York; Montpelier, Vermont; and Montreal. Portions of Mexico and eastern Canada will also experience a total solar eclipse.
WHAT TO EXPECT DURING A TOTAL ECLIPSE IN THE TOTALITY
If you didn’t witness the 2017 total eclipse, get ready for an experience that you’ve never seen before.
The light will start to go dark as if the sun is setting early. When the moon fully covers the sun, you can take off your glasses for a few minutes and witness the event firsthand.
The sunlight forms a shimmering halo around the moon, creating an otherworldly effect like a scene from another planet. It’s impossible to understand if you haven’t seen it in person. The experience is so incredible that people travel across the country to see a total eclipse.
SAFETY OF GLASSES
Our solar glasses are manufactured in the United States and are ISO and CE certified. Eclipse safety is important when it comes to preparing for an annular and total solar eclipse. Normal sunglasses will not protect from the intense rays when the moon passes over the sun.

Remember!!!
Solar eclipse glasses are necessary at all times and all places during the total solar eclipse except during the few minutes of totality. 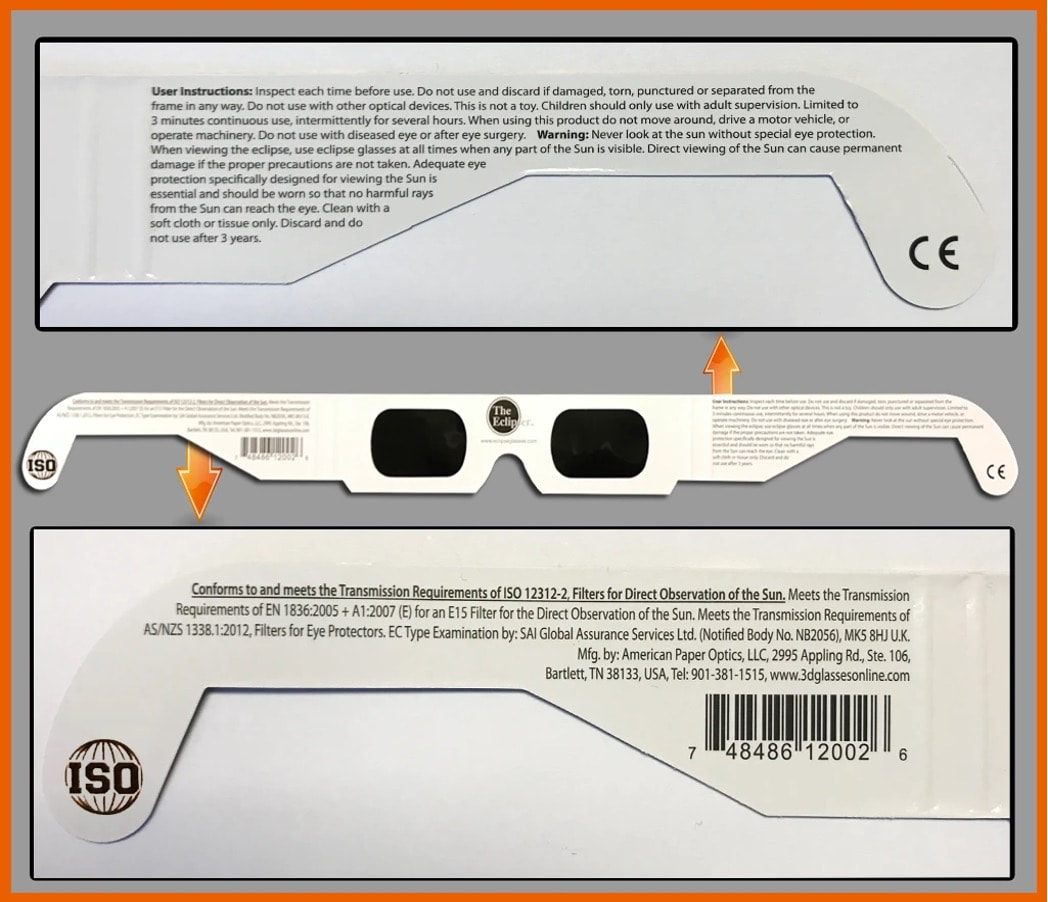