The next annular solar eclipse in the US will occur on October 14, 2023 starting in the northwest and crossing southeast to Texas. 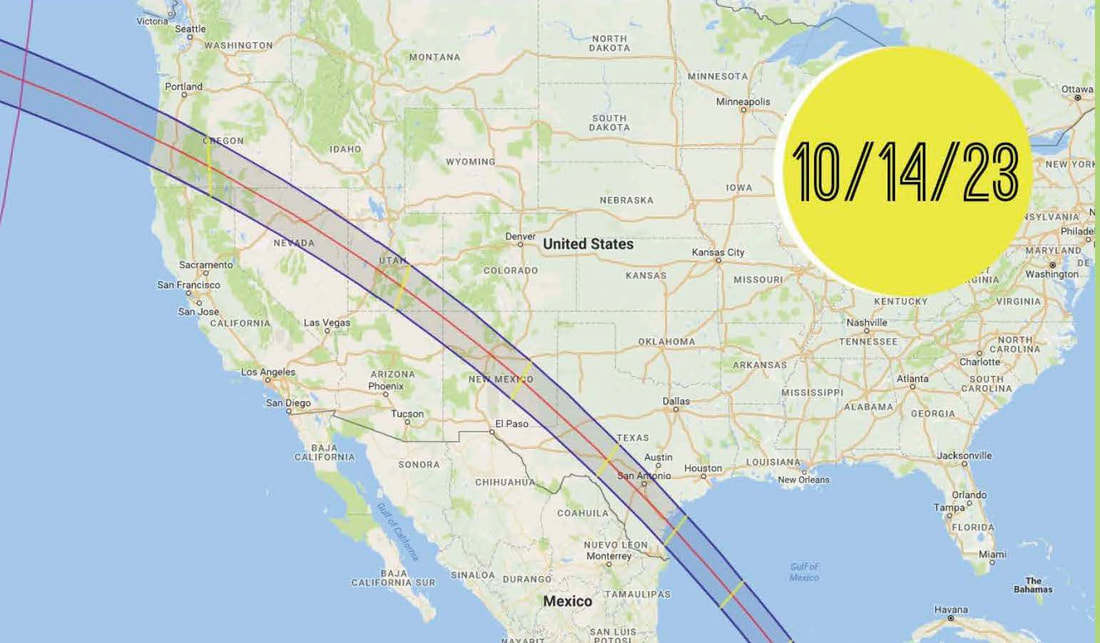 WHAT IS AN ANNULAR ECLIPSE?
​An annular solar eclipse occurs when it is a new moon, and the moon is near or at a lunar node. During this eclipse, the moon is usually far from the earth and is near a point called the moon’s apogee. At the same time, the earth, the sun, and the new moon line up in a nearly straight line. A part of Earth becomes engulfed in the shadow of the moon as a result of this.
WHAT TO EXPECT DURING AN ANNULAR ECLIPSE
During an annular solar eclipse, the moon partially blocks sunlight from reaching the earth. It occurs when the distance between the moon and the earth is large. Since this distance is large, the moon looks small and therefore does not cover the sun entirely. As a result, the moon appears like a small dark disk on top of a large sun-colored disk. Such creates something that looks like a ring around the moon. People often call this the ring of fire.
There are five stages of this type of solar eclipse called the fourth contact, the maximum eclipse, the third contact, the first contact, and the second contact stages. Below are more details on these stages:
​The total duration of this solar eclipse is around six hours. However, in locations where people can see this eclipse, it lasts for around three hours. The ring of fire is usually visible for around twelve minutes in these areas.
SAFETY OF GLASSES
Our solar glasses are manufactured in the United States and are ISO and CE certified. Eclipse safety is important when it comes to preparing for an annular and total solar eclipse. Normal sunglasses will not protect from the intense rays when the moon passes over the sun.

Remember!!!
Solar eclipse glasses are necessary at all times and all places during the annular eclipse.